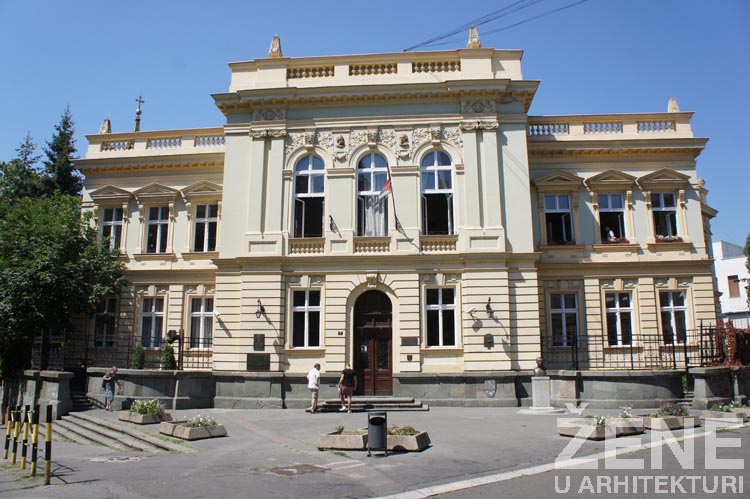 The brave lady Jelisaveta Načić, chose for herself in many ways an unusual and extraordinary life path. Born into a rich and respectable tradesman’s family in Belgrade in 1878, she was successfully educated and after finished grammar school decided to continue her education at the University. This was a rarity in a country where at the turn of the century only seven percent of women had elementary literacy. It was that same year, 1896, when Jelisaveta was starting her studies, that a separate Architecture Department was established at the newly open Technical Faculty of the Belgrade University. Until then students wishing to study architecture departed abroad, to bigger Middle-European university centers, and came back to their home land afterwards to work in the Ministry of Construction. So Jelisaveta Načić becomes the first woman in Serbia to enroll into this typicaly male Faculty, and in year 1900 she was part of the first generation of graduated students of architecture and the first woman architect in Serbia. 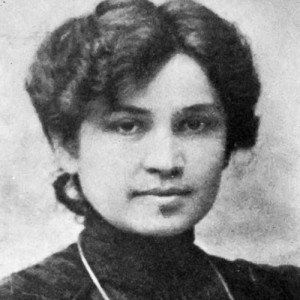 Two years after graduation Jelisaveta Načić acquires valuable practice working as a technical intern in the Ministry of Construction, but after passing the license exam in 1902 fails to find employment as an architect at the Ministry since by law the title of senior civil servant could not be attributed to a female person, but only to man who served in the Military service. The decisive Jelisaveta Načić was not stopped by this. She spent her working years in civil service, working in the Engineering – Architectural department of the Belgrade Municipality, opening thus, together with doctor Draga Jočić, the path to employment of women in the public sector.

At the very beginning of her career, in 1903, Jelisaveta Načić achieves an important success: third place in the Competition for Conceptual Design for the church in Topola, with very strong competitors and with a strict and respected jury. This success positioned her in the field, and brought her many private commissions over the next few years.

Working as an architect in the Belgrade Municipality Jelisaveta Načić had the opportunity to work in various fields, she was innovative and brave, and with great success took part in urban and architectural design of both private and public buildings. Working in the development and realization of projects by other architects, Jelisaveta Načić contributed to the planning of the Kalemegdan Park in the Belgrade fortress, the famous reconstruction of Terazije in 1911, as well as the unrealized design for the square in front of the Belgrade Cooperative building. During her engagement in these urban projects, she also designed independently, which is still visible today in the conserved granite neobaroque staircase with fountain that connects the main walkway (for which she had designed the decorative railing destroyed in the First World War) to Pariska Street. 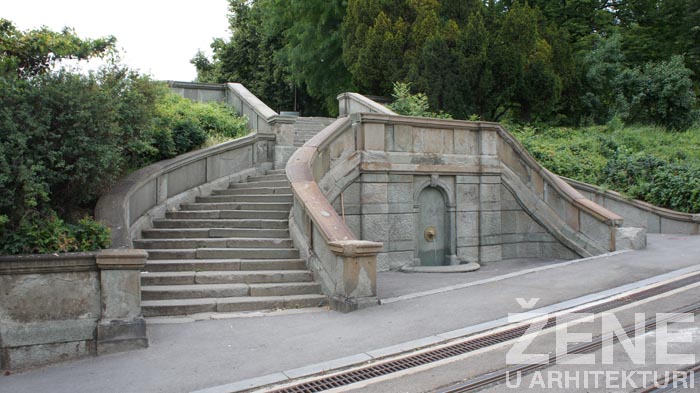 Certainly the most famous architectural design by Jelisaveta Načić, a true architectural master piece, is the building of the primary school next to the Main Belgrade Cathedral, later named “Primary school King Peter I” in the street that bears the same name. The construction of a contemporary school building with 16 classrooms, electrical lighting, heating system, toilets, auditorium, large vestibule and a gymnasium was a large and ambitious task. Jelisaveta Načić designed the building in the Academic style, but slightly departing from the strict rules of symmetry and adjusting the building to the site. With the right choice of architectural and decorative elements, she emphasized the central part with a skewed facade in the center of which is the main school entrance and on the first floor the windows of the auditorium. With this design Jelisaveta Načić proved her undisputable talent, and Belgrade and Serbia gained a completely contemporary school facility. The building is today listed as cultural heritage. 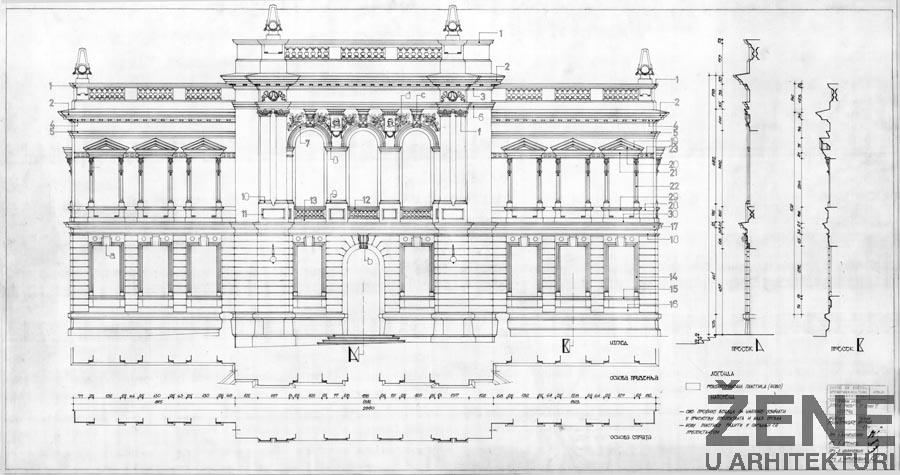 Among her public work, Jelisaveta Načić designed in 1912 the Pavilion for Tuberculosis, which was demolished in 1919. Functional, with a large terrace for sunbathing of patients, the Pavilion was the first hospital of this kind in Serbia. Also, she is the author of the first circular kiln and other brick-making facilities in Prokop, destroyed during First World War. 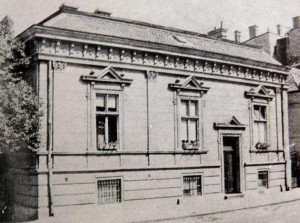 Jelisaveta Načić achieved considerable success in designing private homes, namely the home of bookstore owner Marko Marković from 1904, on the corner of Kapetan Mišina and Gospodar Jovanova streets, which has been recently listed as cultural heritage. With small amendments from the forth decade of the 20th century, this house still today testifies to the continuity of city life on the Danube slope. Several private homes have been demolished over time due to war damages or changes in the urban plans, but based on a few that remain, more or less unaltered, we can create an impression about a certain type of house that was the original design of Jelisaveta Načić.

Jelisaveta Načić has also tried herself in sacred architecture. After her success at the Competition for the church in Topola, she designed the church of Alexander Nevski on the corner of Cara Dušana and Francuska streets. Today’s appearance of the church is the work of architects Petar Popović and Vasilije Androsov, based on whose project the building was continued after it was interupted during the war. The church’s foundations were started based on the project by Jelisaveta Načić, and it is not known today to which extent the project by Popović and Androsov has similarities with the original concept. The only sacred building that has been completed according to Jelisaveta Načić’s design is the small memorial church in Štimlje in Kosovo from 1920, which has been reconstructed after it was damaged in 2004. 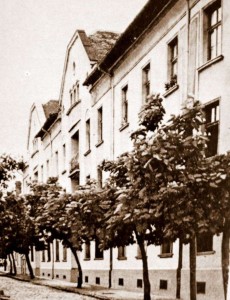 The Workers’ Housing Complex from 1910-1911 (between streets Venizelosova, Komnen Barjaktara and Herceg Stjepana ), the first building constructed purposefully for residential apartments in the Balkans region, is also the work of Jelisaveta Načić. They are characterized by simple architecture, almost without any ornaments, with comfortable, functional, yet inexpensive apartments. The block is closed with a long row of buildings from the third decade of the 20th century, which fits in with Jelisaveta’s complex and concludes a harmonious whole. This building by architect Načić has been as well as listed as cultural heritage.

In 1913 Jelisaveta Načić designed the Terazije arch, placed on Terazije in honor of the return of the Serbian army from the Balkan wars. The legend remains that the arch’s inscription “There are still unliberated Serbs” caused her to be taken during the First World War to the concentration camp Neusiedl. TheFirst World War interrupted her fruitful career. She kept working on the reconstruction of damaged Belgrade buildings until she was banished to the camp in 1916. At Neusiedl she married an Albanian revolutionary and poet Luka Lukai and gave birth to a daughter. She was released from the camp and returned to Belgrade, to her mother’s, with her daughter. Later with her husband she left for Skadar, and then Dubrovnik where she remained until her death in 1955. She never again worked as an architect and never received her pension.

Jelisaveta Načić was a great talent. We often emphasize the fact that she was the first woman architect, but we would still talk about her as an architect if she was not a woman. That was the extent of her talent. Her designs are flawless, and we must acknowledged her extraordinary courage and perseverance to be a part of the first generation of architectural students and the first female graduate architect in the country, to be one of the first women employed in the public sector, as well as her courage to design, as a very young architect, the first modern school building, the first hospital for tuberculosis, the first circular kiln for making bricks, the first planned residential building in the Balkans. And all of this in a very short time. 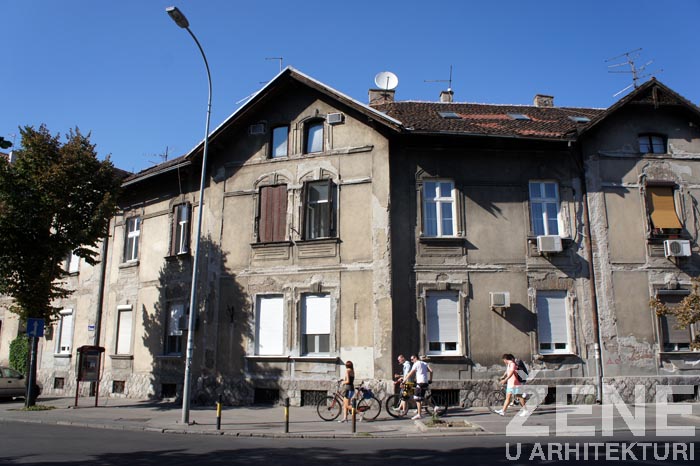 Jelisaveta Načić is present in the urban memory of the city mostly with her extraordinary projects, but also with some concrete actions. In 2004 a street opposite her workers’ housing complex got her name. At the same time an initiative has been started to dedicate the existing building within the workers’ housing block to the memory of Jelisaveta Načić and create a park around it. This initiative, together with other similar projects, shows the willingness to save the memory of Jelisaveta Načić, and appropriately value her work and contribution to Belgrade’s architecture in the time when Belgrade was becoming a true European city.

Bojana Ibrajter Gazibara, the author of this text, is an art historian – conservator and expert associated at the Cultural Heritage Preservation Institute of Belgrade. She participated several times in her career as a guest-lecturer in various manifestations related to architecture. She also cooperated with printed and electronic media on the topics of Belgrade architecture, notable architects and heritage buildings. She is the author and co-author of several exhibitions of cultural heritage.