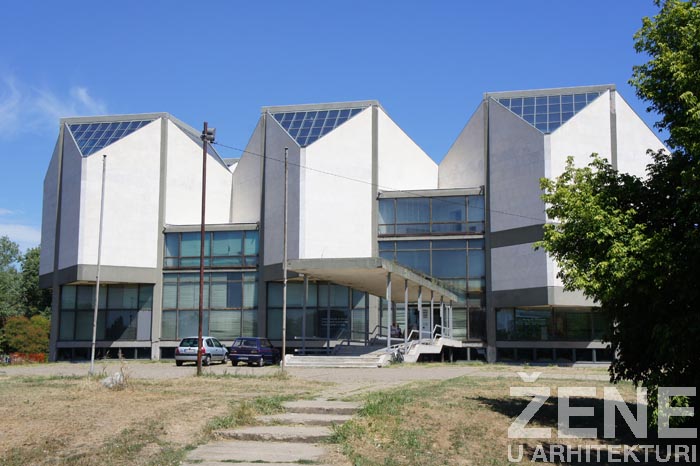 Exactly two and a half years ago I visited Ivanka Raspopović in order to fond out more information on two topics I was at the time researching. The first topic was Ivanka’s professional resume, which I obtained in its version published in 1972 in the book Yugoslav Art of the 20th Century: Serbian Architecture 1900-1970. I was enthralled by the idea of writing an article about women in architecture in Serbia, which I quickly abandoned. So, indirectly, we get to the second topic for which I hoped to gain more data from Ivanka – and that was the archives of Srbijaprojekt. To start, I brought her a copy of her resume, which needed to be filled in and, as it turned out, amended. 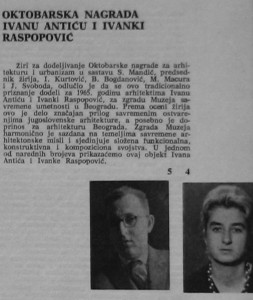 First, I should clarify which companies she worked for. Chronologically, it went like this: From 1945-55. Ivanka worked in the construction company Rad. Afterwords, in 1955 she moves to Srbijaprojekt (previously The Design Institute of Serbia), where she stays until 1960.  From 1961 until 1964 she works in the company Zlatibor, and then again in Srbijaprojekt from 1965 to 1980, when she retired.

In Rad she was employed in the technical studio with her husband, at the time of the construction of the viscose factory in Loznica. The construction site had five sectors: the management building was done by Ivan Antić and that is how their cooperation began. According to her own words, she worked with the best civil engineers of the time: Milan Krstić, for example, who was then using the unique opportunity to test the behavior of prestressed concrete shells, which housed the water coagulators of 25 m radius. Later he applied this experience during construction of Hall 3 at the Belgrade Fair. But Ivanka was often required to control the documentation and calculations, send projects to auditors, so she didn’t enjoy working at the construction site. 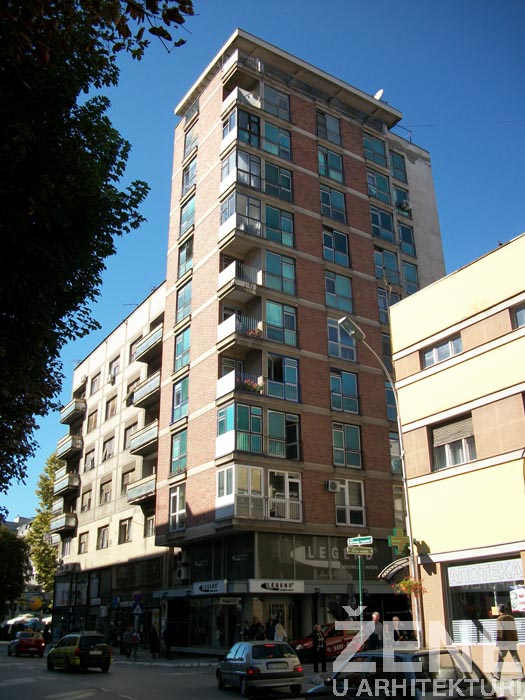 Cables factory  in Jagodina… I wouldn’t even remember that if it wasn’t written here… I was stunned – how can someone forget what turned out to be an important part of their built opus? Ivanka replied she never liked industrial architecture, and always did these project under obligation. Actually, Ivanka was the lead designer of the entire complex of the cable factories in Svetozarevo (today Jagodina) while she worked in Srbijaprojekt. Together with the team of ten colleagues she worked for three months overtime, from dawn til dusk, without any overtime compensation. They delivered two cars full of documentation just before the 1st May holidays.

For Srbijaprojekt she designed the workers dining facility in Obrenovac, a tuberculosis hospital in Prizren, cold storage for fruit in the vicinity of Tetovo, department store in Bečej and the industrial zone in Priboj, as coauthor with Slobodan Mihajlović. Maybe one of the more interesting projects was the design for the second phase of Belgrade Airport, by invited competition where four teams for major design offices took part. During her work at the company Zlatibor, she designed two transmitter stations at Zlatibor, the building for the Electric distribution company in Užice and a residential building in Užice, at the Partisans Square, where her Client was the General hospital Užice. Ivanka was also often a collaborator on projects by Stanko Mandić, both built and unbuilt.

On Museums and Working With Ivan Antić

It’s simple. Ivan came to our house and said he wanted to do the competition for the Modern gallery (already in 1965. renamed Museum of contemporary art). From our house came out two awarded competition proposals: my husband (Dragan Raspopović) and Bane (Slobodan Mihajlović) got the first mention. 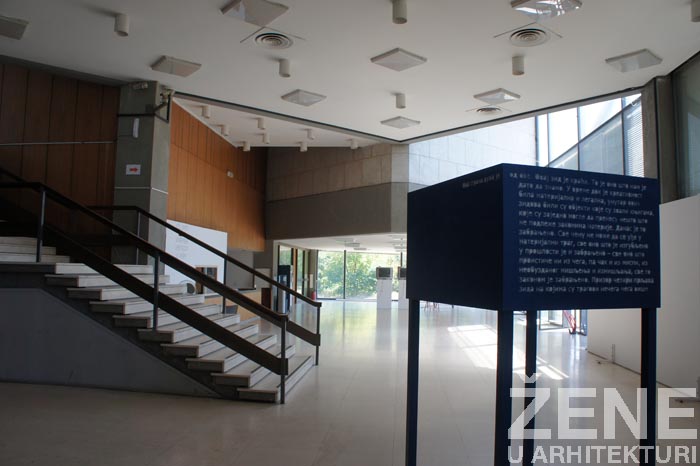 Even today, she can not believe that she and Ivan got the first prize, because they put together the drawings in one week. During the project development there were also two major changes. First the front facade, which in the competition proposal had one flat wall, after consultations was designed and built in today’s distinctive crystal form. Already experienced architects, with an adopted feeling for savings, they proposed the facade finish in exposed brick – which was applied later on the design for the Museum 21. October in Šumarice. Miodrag Protić, however, managed to acquire white Venčac marble for the facade of such an important building, and the authors instantly agreed. The Museum of Contemporary art was opened in 1965, and the same year Ivanka Raspopović and Ivan Antić were awarded the October award for this architectural masterpiece. 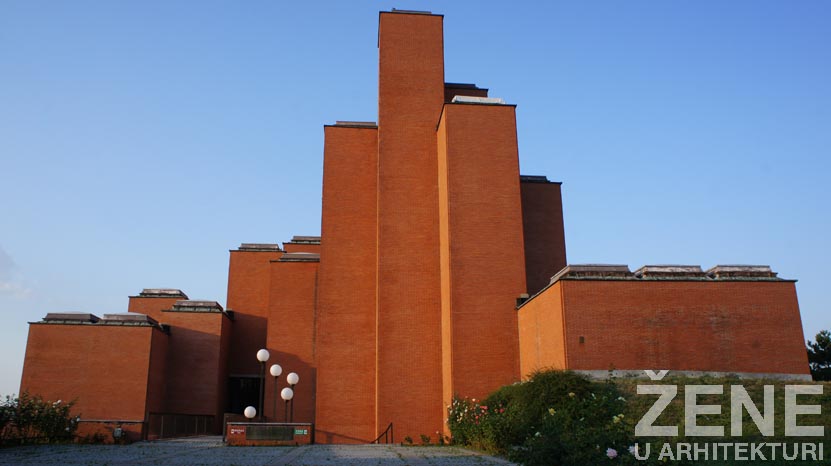 Very quickly after the Museum of Contemporary  Art opened, Ivanka and Ivan were given the task from the management of the memorial park October of Kragujevac to design the Museum 21. October. Ivana doesn’t talk about the symbolics of the project, just says how much she is fond of the building, inspite its’ very modest dimensions. She adds that the roman bricks, specially made for the Museum by Rad company, have deteriorated and the facade needs reconstruction. However, after the experience she had then (which is still the same) with the renovation of the Museum of Contemporary  Art, she was not sure if it’s a good idea to enter such an undertake. 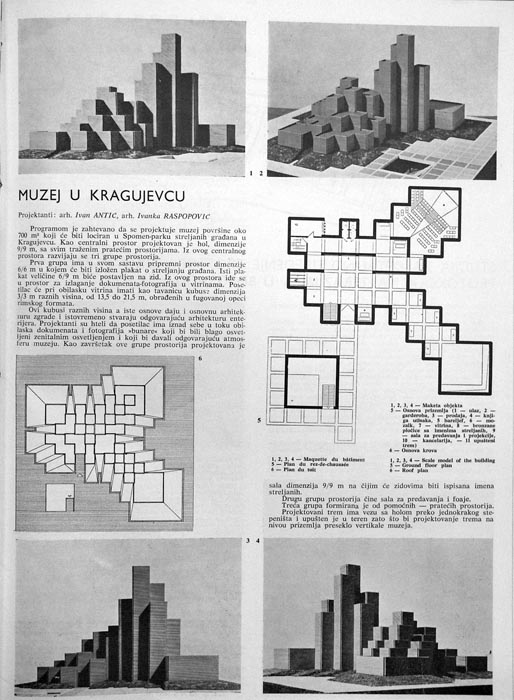 Of course, I couldn’t resist asking what many researchers ask when it comes to the Antić – Raspopović  partnership: How did they share the work on these two buildings? Where does Ivanka’s museum stop and Ivan’s begin? And why such a fruitful cooperation was not continued? Again, I got very simple answers. Absolutely everything was done as  a team. They agreed on who and when each of them took over the workload – and it was similar with the reconstruction of the Museum of contemporary art, where they were both consulted during the development of design documentation. Ivanka points out that architecture of museums is very inspiring, so it wasn’t neither hard nor painstaking working on these projects. Their cooperation was not continued because Ivanka had too much work in Srbijaprojekt, and Ivan at the Faculty.

To return to the topic of Srbijaprojekt’s archives: It is – very simply – gone. Just as the destroyed archives of Projektbiro is gone – so it is far more difficult to reconstruct the career of Jovanka Jeftanović, or for example Ljupka Andonova, who worked in Architecture and Urbanism. Thanks only to her own commitment and sense for documentation, Ljiljana Bakić published The Anatomy of B&B architecture, so we can learn about the ups and downs that she endured in her professional life. We can also read how  Ljiljana Bakić remembers Milica Šterić,Madame Energoprojekt.

Actually, most women in architecture in Serbia, especially in the period between 1945 and 1990, designed within big state-owned offices and companies, or within specific self-management ateliers, such as Projektbiro. Proverbially unorderly and during all sorts of privatizations lost (or “lost”) archives and unreconstructed references of these companies become a chronic issue of our architectural scene.

And women architects were the majority in Srbijaprojekt, says Ivanka Raspopović. And we believe her.

The author of this text, Jelica Jovanović, is a PhD student of University of Technology Vienna, Institute of Art History, Archaeology and Restoration – Department of Conservation and Refurbishment. Graduated from the Faculty of Architecture, University of Belgrade, Elective Course 2 – History and Theory of Art and Architecture. Founder and member of professional NGO Group of Architects from Belgrade. Co-author of Summer School of Architecture in Bač. Coordinator of the regional project Unfinished Modernizations on behalf of the Association of Belgrade Architects. Former Secretary-General of Do.co.mo.mo.  Serbia. Former member of Club of Young Architects – KMA (2006-2010). Former teaching assistant at the master course on architectural and urban design in protected areas and various workshops. Within Do.co.mo.mo. Serbia national working party currently working on proposals for the policies for protection of the architecture of modern movement in Serbia, based on experiences of Do.co.mo.mo. International.