Alpha and Omega of Energoprojekt’s Architecture 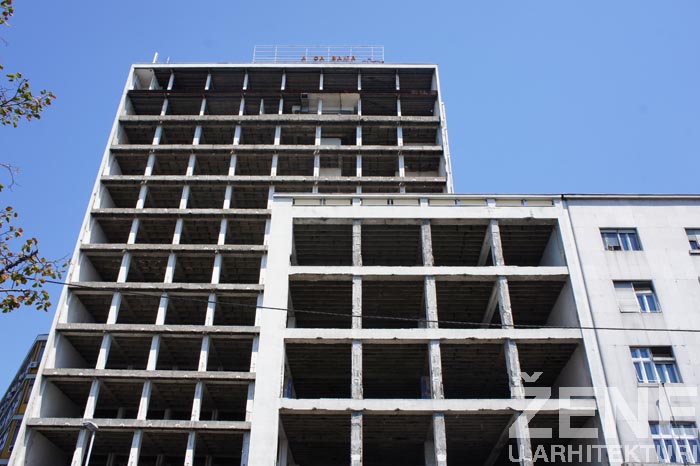 It is less known that the principal architect of Energoprojekt, one of the biggest construction companies in Yugoslavia, at the time of its development and rise, as was stated in the monograph published in honor of 60 years of its existence, was  a woman. It is even less known that she designed some of the first power plants in Yugoslavia, so important for the development of industry in the years after the Second World War.  Of course she was not alone, she was a full equal member of engineering teams gathered around the common tasks of rebuilding the country, and she was, as well, assigned the project of Energoprojekt’s first office building in Belgrade, on Zeleni Venac square. 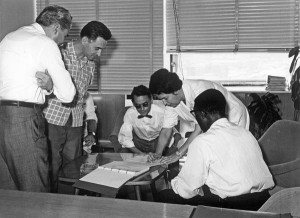 Born in 1914 in Smederevo, Serbia, and after completing her high school there, Milica came to Belgrade to study architecture at the Technical faculty. She redirected her talent for drawing and painting towards architecture after she was first introduced to the profession by her brother-in-law Božidar Trifunović.

She graduated in architecture in 1937, and under the influence of professors Milan Zloković, Bogdan Nestorović and particularly Aleksandar Deroko, she started designing primarily mimicking the national style. However, Milica Šterić left her true and mature mark on architecture following the ideas of CIAM and the socialist spirit, which however didn’t let her engage the social-realist style. Instead, her role in the building of a new, socialist society and the original Yugoslav model of self-management socialism, she found in the first years of the renewal, working on the projects for the country’s rebuilding. Putting her carrier into action for the common good, in 1947 she starts working in the company Elektroistok, a predecessor of Energoprojekt, and in the following decade she commits to the industrial and infrastructural architecture and construction and designs power plants. 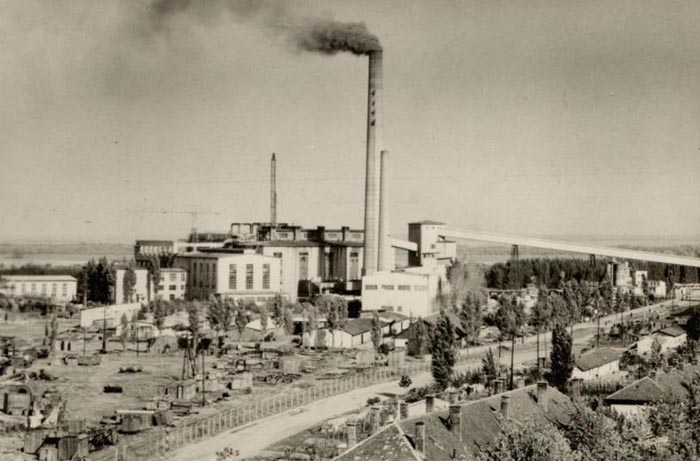 Already in the first years after the Second World War, decisions were made on founding power companies of general public importance, thus creating a path towards the construction of power plants throughout Yugoslavia, without which the industrial development of the country would be impossible. Immediately after the liberation plans were made for new power facilities. As the Germans left behind an unfinished power plant in Kostolac, a decision is made to repair the old thermal power plant in Belgrade and move it to Kostolac. This was the creation of power plant Mali Kostolac already in 1948,  for which Milica Šterić developed the architectural and structural design. Other facilities followed, particularly after the founding of company Hidro-Termo Elektroprojekt in 1951, later renamed Energoprojekt. The oldest and today still active thermal power plant Kolubara A in Veliki Crljeni, next to the coal seam of the same name, was built in 1956 as the biggest Serbian power facility, and the design is signed by Milica Šterić and Božidar Petrović. At the same time Milica designs also thermal power plants Kakanj in Bosnia and Herzegovina, southeast of Zenica andVelenje in Slovenia, as well as the unfinished thermal power plant Lukavac in Bosnia and Herzegovina, near Tuzla. 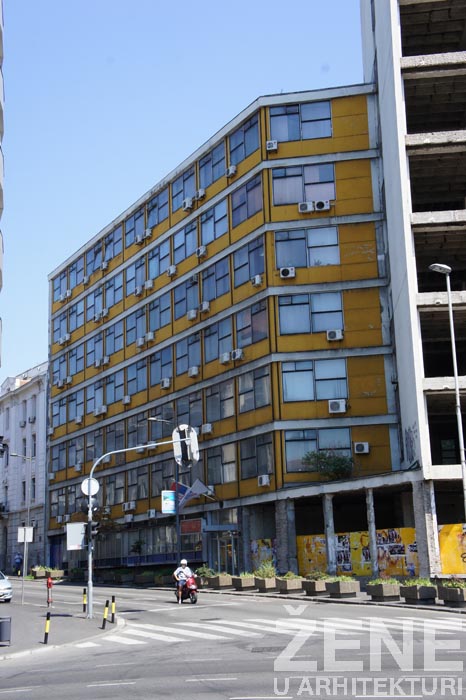 In 1957 she goes to Netherlands thanks to the half-year stipend from the Dutch government, where she works in the office of Van den Broek and Bakema and improves her architectural expression on the heritage of Bauhaus. Pure structural forms and combination of steel and glass facade will remain a permanent element of her work, visible on buildings such as the office building in 2 Carice Milice street in Belgrade from 1957, as well as the building of social insurance in Smederevo, which she designed in 1958 together with Božidar Petrović.

The building in 2 Carice Milice street in Belgrade is under protection today since it represents a beautiful example of Modernism, with strips of windows that emphasize the horizontals and a simple facade which follows the logic of designing from inside towards outside. Functionally, this building still serves as office space for the Electric Power Industry of Serbia. Regardless of the building’s height, architect Šterić utilized all the benefits of this location to open up the building and allow views towards the city. Its bevelled corner toward the intersection with Brankova street opens up to the Sava waterfront. The column and beam structure system in a double corridor organization stretches alongside the street to its corner and ends with a bevelled edge with  a wide angle toward Brankova street, where Šterić will design the awarded headquarters of Energoprojekt 3 years later, thus completing her urban design of this city corner. The first Energoprojekt office building was finished in 1960 and represents Milica Šterić’s most successful realized design, for which she was awarded in 1961 by the country’s top officials, and which is also today under protection. Unfortunately, the building is today practically abandoned, since her reconstruction and adaptation have been postponed for an undefined period for financial and structural reasons. It’s standing there, completely stripped, with its structure exposed, waiting to regain it’s face and life. 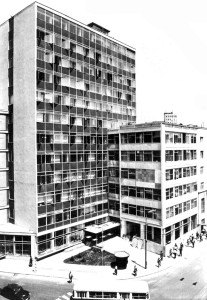 Those years Šterić also designed a residential building in Alekse Nenadovića street in Belgrade, and continued to work in Energoprojekt on residential projects for Smederevo in 1965, then an entire residential complex from 1975 to 1985, then projects in Bor, Bijeljina, Kladovo, Herceg Novi. In her hometown Smederevu she also designed several public buildings – Department store in 1971 together with Aleksandar Keković, Children’s facility in 1978-80 and the Cultural center in 1978-90.

As lead architect and later the director of the sector for Architecture and Urbanism in Energoprojekt at the time of its building an international reputation, Milica Šterić participated in numerous international competitions and worked on projects such as The complex of ministry buildings in Kano, Nigeria together with Zoran Bojović 1970-72, then the Bedouin settlement in Kuwait with 5000 houses together with D.Bakić and Z. Jovanović in 1971-74, the Military settlement Chimpata in Zambia in 1970 and others.

Regarding the exhibition Three Pillars: Zoran Bojović by the Museum of Contemporary Art Belgrade, the architect Zoran Bojović in conversation with the curators Andrej Dolinka, Katarina Krstić and Dubravka Sekulić remembers his cooperation with Milica Šterić: Milica Šterić was really an outstanding figure and architect. Milica was full of energy, she was tremendously ambitious and persuasive. She had a way of putting a spell on you, of introducing you to the project, of guiding you. We worked together. Although I was still a begginer, she gave me a free hand. She was a source of inspiration.No small part in architecture’s breakthrough within Energoprojekt belongs to her. She even established the Sector of Architecture and Construction. It was thanks to her that we achieved big promotion in the foreign market, she was the one who got it all started. She saw architecture as something special. Once, when asked to give her definition of architecture, she even went on to state: Comrades, the architecture, that is the avantgarde! And she behaved accordingly. She was unique, and afterwards we never had a director like her. 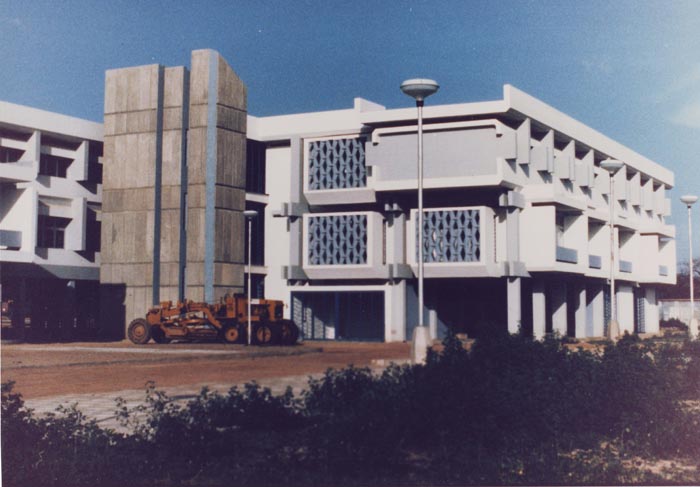 In the same interview, Zoran Bojović tells a amusing anecdote from their joint work on the project for the Complex of ministry buildings in Kano, Nigeria:When we finished the design for the Kano State ministries, we organised small exhibition at the governor’s mud palace that we admired so much, to present our project. As we made the preparations for the exhibition, pasting the ozalid prints up on the walls, Madame was terribly excited. She didn’t speak any English and so she memorised by heart the text that was to explain the exhibition to the governor. She was going from one drawing to another rehearsing her speech aloud. There happened to be some policeman snooping around. Suddenly, as we have finished pasting, Madame says: Well, now, where is that governor? Will he come already? To which the policeman replies:I am the governor. The project is adopted. It got her stupefied: But I didn’t say anything yet! He: On the contrary, Madame, you said all there is to say. 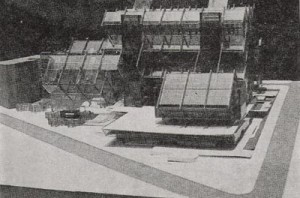 In local competition, maybe the most interesting is her work with Dragan Jovanović and Momčilo Milovanović at the competition for the architectural and urban design of the Slavija square in 1978.

Another one of her works in the heating plant in New Belgrade from 1965, damaged in the NATO bombing of Serbia in 1999.

Milica Šterić is a laureate of the Grand Prix in Architecture in 1984, awarded by the the Union of Architects of Serbia, and is the only female architect to whom this institution devoted a special publication (1991).

She passed on Christmas Day 1998 in Belgrade.

Special thanks to Dubravka Sekulić for providing us with the material taken from the interview Everything is Architecture! which was prepared as part of the exhibition Three Pillars: Zoran Bojović by Andrej Dolinka, Katarina Krstić and Dubravka Sekulić. The book with the same title, containing the entire interview, will be available by the end of this year.

The author of the text is Marija Maša Pavlović.