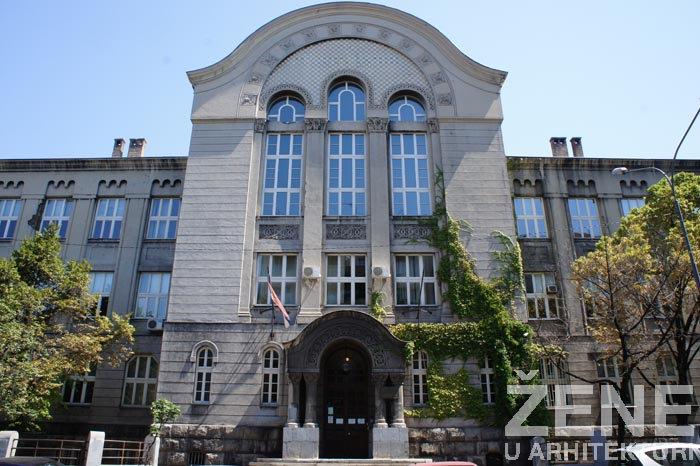 Milica Krstić (maiden name Milica Čolak Antić) is one of important representatives of the architectural profession in Serbia between the two wars. As an author whose work has marked the architectural and urban image of Belgrade, and as a tireless advocate of her profession, Milica Krstić is considered one of the most important woman architect of the first half of the 20th century, who left a visible trace in the development of contemporary Serbian architecture. 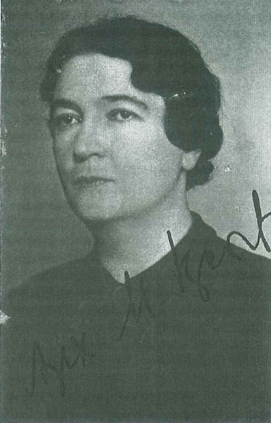 She was born on September 9th 1887 in Kragujevac, as the granddaughter of Duke Čolak-Anta Simeonović. After graduating from the Girls High School in Belgrade in 1905, she enrolls in architecture studies at the Architecture department of the Technical faculty of the University of Belgrade. During her studies she met her husband Žarko Krstić, also an architect.

The carrier of Milica Krstić is an interesting example of advancement and a career in civil service. In 1915 Milica Krstić begins her employment at the Architectural department of the Ministry of Construction, on complex tasks of design and construction, which she will do until her retirement in November 22nd  1941. The Architectural department of the Ministry of Construction was at the time the most important and the largest architectural office in the country, where her colleagues were Momir Korunović, Pavle Ilkić, Nikolaj Krasnov, Vasilij Androsov, Branislav Kojić and others. During her career Milica Krstić advanced in service a total of 19 times, moving up from an subarchitect to architect, consultant, senior consultant and finally inspector.

Work at the Ministry has a great impact on her creative path, as well as limited it with the requirements and restraints of the civil service. Like other women in architecture at that time, Milica Krstić was assigned to projects of school buildings that marked her creative opus. She designed various school buildings, from small village and town schools around Serbia to monumental high-school buildings in Belgrade. In the period from 1923 to 1929 she developed a series of designs for high-schools in Serbia, mostly in the style and spirit of local building traditions. 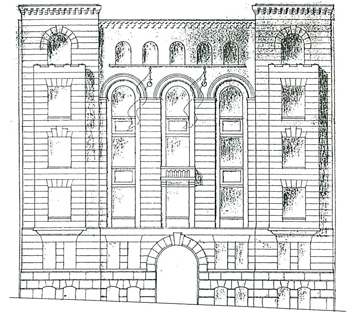 Although she started her career designing village schools, advancement in service resulted in assignments to more complex tasks. Milica Krstić designed monumental buildings as well, and the first such building was the Command of Gendarmerie from 1931 in 14 St. Sava street in Belgrade, today the building of Komercijalna Bank. As an example of academism in architecture, in accordance with its purpose and client, this building showed Milica’s dedication to functionalist approach to design. The complex program was skillfully divided into 2 buildings – the courtyard building, simple in its appearance and intended to house auxiliary facilities, and the Command building whose academic symmetry allowed a functional distribution of space, in line with its program. The front facade is also treated in accordance with the building’s purpose, and the massive stone decorations clearly represent the power and stability of the institution that was the Gendarmerie of the Kingdom of Yugoslavia.

Two monumental school buildings in the very heart of Belgrade were the highlight of her career. These two houses, which still stand today and equally successfully serve their purpose, are The Second Girls High School from 1932, today Electro-technical high school Nikola Tesla in 31 Queen Natalia Street, and The First Boys High School from 1936 in 65 Dušanova Street. 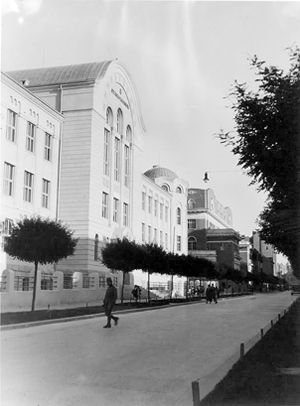 The Second Girls High School in Belgrade was constructed in 1933, in place of the Girls College and the building of the State Council, in Queen Natalia Street (after the Second World War it was renamed to Narodnog fronta Street). Milica Krstić has herself attended this high school. The construction took only 8 months, from April to November 1933.

The building has a total surface area of approximately 3,000 sq. m, with basement, ground floor and three levels with around 250 classrooms. The basement housed apartments for the help, storage and technical spaces. On the ground floor, besides offices and cabinets, there was a gymnasium with a changing room equipped with showers, a cafe, the school infirmary and other auxiliary programs. The classrooms are located on the upper floors, and each has an adjoining wardrobe.

One wing of this monumental edifice also housed a small chapel, in memory of the St. Natalia’s church that once stood in this place. The chapel is located on the second floor , next to the auditorium with galleries. The iconostasis for the chapel was painted by Vasa Pomorišac, and the large fresco which was above the iconostasis was the work of Milo Milunović.

The facade is characterized by a simple and modernized Serbian-Byzantine style. The damages which occurred to it during the war from bullets and shrapnel shells are still visible. The school also has a spacious yard, located in the center of the urban block. Over 5,000 sq. m of open space was intended for the play of students, with two large terraces with stucco balustrades overlooking the yard.

The school’s interior is spacious and light, and the large and well equipped classrooms and cabinets, drawing hall, gymnasium and auditorium, all made this building the most contemporary and the most representative school building in Belgrade at the time. For its architectural, cultural and historic value, the building of the Electro-technical high school Nikola Tesla has been declared a cultural heritage in 1964. 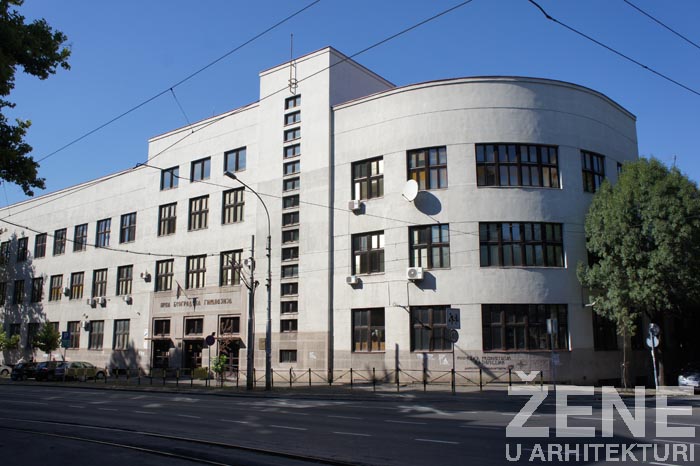 The construction of the new building for The First Boys High School, which previously changes several locations, was started in 1936, after the Municipality of Belgrade donated a plot for the school next to the church of St. Alexander Nevski. In April 1938 the school moved to the edifice constructed by the design of Milica Krstić, in which it still remains.

The corner building is significantly different from the monumental Serbian-Byzantine Second Girls High School. Because of the small surface area of the plot, the school building was placed on its edge, and the classrooms open to the inner courtyard. Again the function and form are skillfully combines and the three wings of the building are used for functional grouping of the spaces. Besides classrooms, cabinets and offices, the school had a kitchen and dining room, workshops in the basement, a gymnasium, a drawing hall, a singing hall and an auditorium. The school also houses the infirmary, library and reading room, an apartment for the principal, an atelier for the art teacher and accommodation for the help in the basement as well.

Equally functional and contemporary in program as The Second Girls High School, this school building was designed as an example of the International style, with no unnecessary decoration. White facade, lack of decoration and the rounded corner form clearly point to the influence of modernism. Like her peers of the Belgrade school of modernism of the time, Milica  Krstić has too, and with success, applied the principles of Bauhaus and Modernism, and gave this part of Belgrade one of its architectural symbols. In 1989, The First Belgrade High School was declared a cultural heritage. 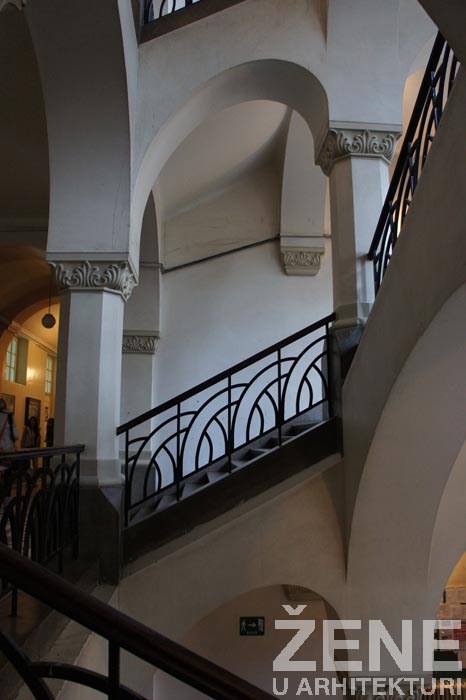 Milica Krstić spent her entire career in the Architectural department of the Ministry of Construction, where she took the entire path of professional advancement, from subarchitect to inspector. During this time she was engaged on a large number of projects, as construction supervision, as audit for projects by other authors and in various committees evaluating and approving different projects. She was a very educated women, who spoke French, Spanish, English and German, and was energetic and responsible. Advancing in service, she was given an opportunity to work and live for a while in Buenos Aires and Ankara, working on the construction of Embassy building for the Kingdom of Yugoslavia.

She was socially active in professional associations like the Architect’s Club, where she held several lectures about conferences she visited abroad, transferring to her colleagues her own impressions about their peers who are today considered as Modernist icons, as well as female societies such as theCircle of Serbian Sisters and the Yugoslav women’s league for peace and freedom. She fought for better standing of her female colleagues and often emphasized their work and credits.

She finally reached the highest position at the Ministry of Construction – she was named inspector in 1940, one year before retiring. Milica Krstić spent the war years and the turbulent post-war times in her house in Silvija Kranjčevića Street, which she built with her husband in 1937, based on her own design. Through the house passed Germans and partisans, uninvited guests and criminals, some for shorter and some for longer periods, and Milica Krstić remained through all that hardship with strong spirit and unbreakable will, to which testify the remaining documents from her life. She passed in 1964, and her house was afterwards, in 1970s and 1990s, completely altered and extended.

Among her personal documents there is a hand written oath she took in front of the Minister of Construction when in 1934 she became Consultant of 4th group. The oath read: I, Milica Krstić, do swear to Allmighty God that I will be loyal to the ruling King Peter II and the Fatherland, that I will do my duty according to law and lawful instructions, consciously, diligently and impartially, keeping in mind only common public interest and avoiding all that could be detrimental to the duty hereby entrusted to me. So help me God.

Special thanks to Mrs. Maja Čolak-Antić, who provided valuable insight into the life and personality of Milica Krstić, as well as her surviving personal documents. – MZ